1,000 Unique Fidget Spinner Collectibles on the Blockchain!
Buy Now on OpenSea
NEXT DROP 00 hr 00 min 00 sec
About
How to Buy
The History

CryptoSpinners is a collection of 1,000 animated GIF artworks stored as NFTs on the Ethereum blockchain. Every spinner is a unique 1 of 1 collectible crafted with love inspired by the viral toy from 2017.

Each collectible features variable elements that determine its rarity.

The model of a spinner is predominantly what determines its looks. There are nine different models, with 47 total unique form factors distinguishing spinner aesthetics:

Spin is the speed at which the spinner rotates and is visible in the animation itself. Technically, the faster the better. But there’s also something to be said for a slow cruise, right?

Friction is a rarity statistic that impacts the physical resistance of the ball bearings on the spinner frame. The lower the number, the better!

Inertia determines the integrity of the forward motion of the spinner. The spinners with higher inertia handle better than others.

Flux is the spinner’s internal power and defines the total possible performance output of it’s performance.

In addition to models and statistics defining rarity, each spinner features a unique color combination and texture. Here are just a handful of examples:

Of course, another statistic not to be overlooked is a spinner’s number. From #0 to #999, there will only ever be 1,000 total in the collection.

All of these rarity factors are visible on every spinner’s OpenSea page: 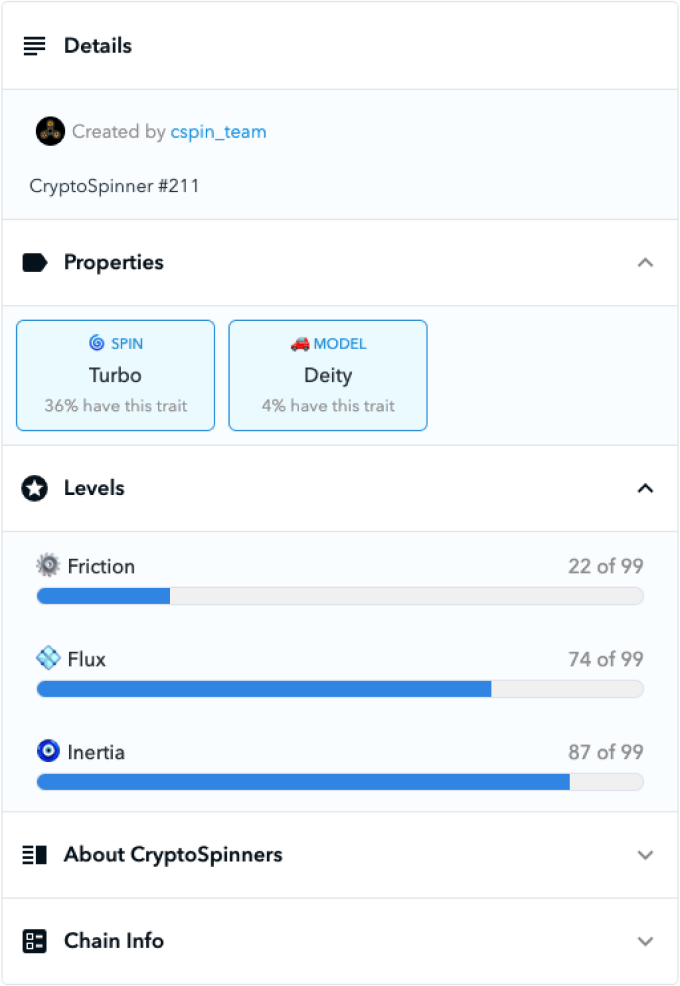 The best ways to enjoy a CryptoSpinner collectible include:

IPFS Hash for all assets at: QmUuZhNi91RBttnSvTQGYfzBWX8wAscKKEVvXfyLUEvFLa

CryptoSpinners are can currently be purchased with a MetaMask wallet on OpenSea, where daily drops are happening at 5:00 PM EST according to a bonding curve pricing model.

A more in-depth guide to buying spinners is coming soon...

Our story begins in the summer of 2017. The Crypto market was breaking into new all time highs and TSLA was still trading at $42...

Nick (ex-LarvaLabs intern, creators of CryptoPunks) wanted to develop a game on Ethereum. At the time, fidget spinners were experiencing their zeitgeist as an accessible meme object. He brought Chase, James, and a handful of others together, with the goal of animating spinners on the blockchain featuring battle gameplay a-la-Beyblade style.

But we ran into a problem shortly before launch...

Our game involved players wagering ETH on their own matches. We had also devised ETH payout pools to top players.(1) Our MIT and Boston University faculty advisors were adament that these mechanics violated anti-gambling laws in the U.S.

At this point, the spinners had already been minted to our custom contract. It was very frustrating after having spent so much time (and Ethereum to mint the artwork!) on the game. We decided to table the project until we could work out a better solution.

Flash forward to 2021– and NFTs have transformed the relationship between artists and collectors in the crypto space, and are even penetrating into mainstream news.(2) Just over three years later, we’re so excited to share CryptoSpinners with the world as the first major animated NFT collection on OpenSea!

(1) CryptoSpinners in 2018 (never released)(2) Mark Cuban is bullish on NFTs, and they’re about to go more mainstream with an auction at Christie’s